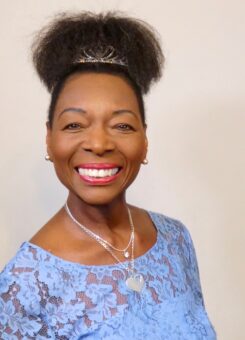 When she was 16, Floella Benjamin planned to become Britain’s first ever black woman bank manager. More than half a century later, that seems to be about the only thing she hasn’t achieved.

Floella is an actress, TV presenter, writer, producer, businesswoman, campaigner and politician. A baroness, she speaks out about children’s and women’s issues as well as diversity and equality. She’s a former Chancellor of the University of Exeter, where a statue now celebrates her contribution to Higher Education.

She has collected a clutch of awards including the BAFTA Lifetime Award and was made a dame in 2020. Her refusal to do anything by halves is illustrated by her rash promise to run 10  London Marathons for Barnardo’s despite the fact she was 50 and had never run more than 200m before. She did it (of course).

Facing adversity with a smile